What a wonderful time in genealogy these four days have been in Birmingham. From 7-9 April 2016 there was the annual „WhoDoYouThinkYouAre? – Live!“ (WDYTYAL) as the biggest genealogy event in Europe with guests from all over the place. Let me tell you about my experiences I have had in these days in the United Kingdom that now are history already. It has been a very successful meeting with wonderful colleagues from the United Kingdom, France and the U.S.

„The World´s Largest Family History Show“ as the organizers call it took place at the National Exhibition Center (NEC, the largest fair of the country) in Birmingham Britains second largest city after London. For us Germans it is interesting to know that Birmingham in the Midlands is twin city to Frankfurt/Main as to Leipzig.

For us German attendees WDYTYAL has developed some very important and valuable perspectives for the future not only concerning our DAGV or the German-American Genealogical Partnership (GAGP) but also together with our European colleagues and international research on family history. Timo Kracke and Günter Junkers from Verein für Computergenealogie along with Reiner Sauer by the Bezirksgruppe Aachen der Westfälischen Gesellschaft für Familienkunde (WGfF) and others did a fantastic job in informing, getting in contact with researchers on German ancestry attending in Birmingham. I am proud of you and thank you for hosting DAGVs and GAGPs information material, giving me the chance to advertise and also giving me a chair to rest … We all have seen a growing interest in the work of German genealogical societies and we all did not suffer from boredom in these days. In conversations with British colleagues I often heard expressions like „what you do in Europe“ or „on the continent“. That was funny and has always been a reason for asking with a wink „if Great Britain isn´t a part of Europe“. Everyone has been very open, friendly and the whole event with thousands of visitors was in a quiet and most interested atmosphere. Once again – as in 2014 – DNA testing was a very big thing for many guests.

Connections between airport, NEC and hotel (thank you Timo Kracke for organizing) were perfect. I could have just fallen out of the plane to reach the hotel! Besides of doing genealogy I was also interested – as always – to see peoples all-day life. And so I took the chance to visit the city of Birmingham by train only 20 minutes away. After seeing a „Spitfire“ plane from war times and different organizations of remembrance The Great War (WWI) and the Second World War at WDYTYAL I decided to visit also the city of Coventry that was just 40 km away from Birmingham and even closer from the NEC. It was very important for me to go there. In 1940 the whole city was destroyed by German air strikes and its famous old cathedral became a monument against war. The old Cathedral of Coventry

Coming back to WDYTYAL in Birmingham I also took the chance to research on English sources on my WEISSLEDER researching in Great Britain (http://www.forum-familiengeschichte.de/weissleder-in-grossbritannien/) and it is incredible to learn from concrete cases the differences to the structures we have in Germany. I used the free access at The Genealogists or at Ancestry to look up things. And I have had a wonderful talk with some archivists from The National Archive that as institution goes directly to the people to get in touch (what we should do here in Germany following this great example). I also learned once again but now in concrete that in UK there is nothing like a „Melderegister“ (so a central register for all citizen) so it is extremely difficult to do genealogical research on inner migration within the country. The only resources there are is the register of birth, burials and marriage. But these three registers are not bounded as we know it from Germany. So leaning from abroad always is something very interesting. I had a wonderful talk to an agent of the General Register Office holding those three registers the question came to my mind „how can a nation exist without ID cards?“ That was very funny. And the answer is: It can.

For supper the British and German genealogists made social at an Indish restaurant. April 9 I was my 47th birthday (Oh my God) and what a great day to do genealogy at WDYTYAL then. But there also was a special occasion for me on this day: I have my portrait painted by the wonderful paintress  Julia Sterland (see http://www.juliasterland.com) from Hertfordshire. I like the portrait very much. Thanks Julia. It will always be so special to me and I promise to sit still the next time. I am learning even though I thought I gave my best … By the way „only“ 17 portraits in three days have been painted by her and here are three of them – with my American colleagues David Lambert and Jim Power both from the New England Historic Genealogical Society (NEHGS) the oldest, biggest and most respected genealogical society in the U.S., established in 1845 and located in Boston, Massachusetts. I really enjoyed the stay but I had no incredians of holiday. It was work – all the time. For me all it shows and I guess my colleagues – especially Sebastian Gansauer who also participated (thanks for your great pictures also) – would agree: English also for us as German genealogists is getting more and more important to get in contact with different researchers from all over the world. There have been German emigrants to everywhere in the world and now their offspring is getting interested to find the place of origin. WDYTYAL once again has shown that genealogical research has become global today. After visiting both RootsTech and WDYTYA twice I see the impact of Anglo-Saxian developments in presenting resources and also technological impulses to all of us. My way to Birmingham and back to Hannover took me through the airport of Kopenhagen twice. The people on board were talking in Danish and I did not understand a single word. This shows how Europe is in this small part of the world: very diverse and even closest neighbours do not understand each other in their different languages.

The flight back was not only very long but became even longer after having some technical problems on board. So in fact I returned home at 00:30 today and that is the reason why I am a little bit more tired that normal …

Let me end by sending special thanks to Peter Towey and his wife Jenny from the Anglo-German Family History Society for being so wonderful representatives of your great nation and being friend to all of us. It has been a wonderful time with all of you guys as members of a great genealogy family and I am looking forward to continue this story of global genealogical research. 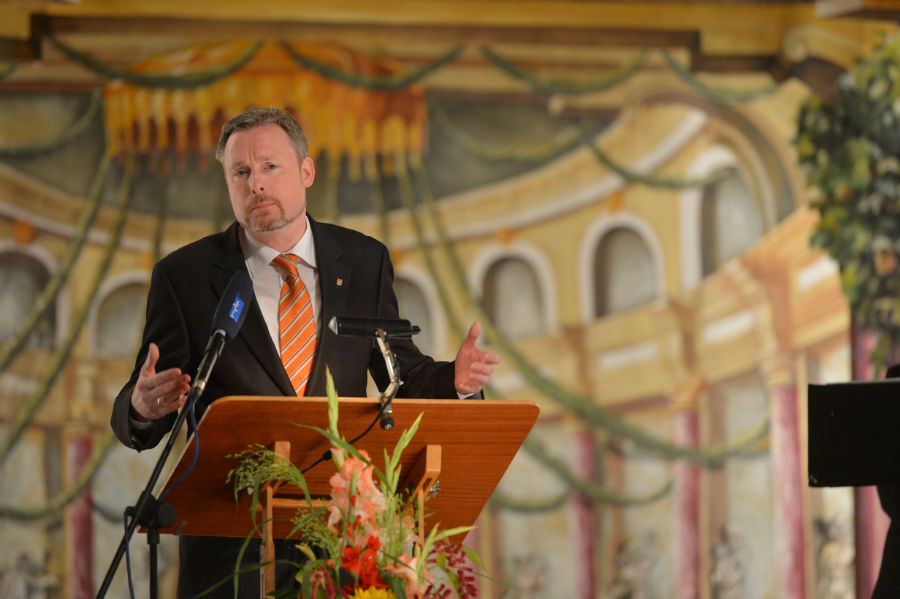